One of the most common positions that we find ourselves in is standing, yet we were never taught how to stand properly! We commonly hear that we need to have “soft knees,” or to never lock the knees out, but why is this the case? Having a slight bend in your knees actually causes more stress at the joint, and as a result, can damage our knees if we remain in this position for a prolonged period of time. So does that mean that we should have “locked knees” when standing or performing exercises? Keep reading to learn our interpretation on the subject on which is safer; “Locked Knees” vs. “Soft Knees.”

In a clinical setting, the plumb line is a tool used to assess proper anatomical posture when standing. It consists of a piece of string tied to the ceiling with a weight tied at the end so that it creates a perfectly linear line that is completely vertical relative to gravity. When assessing posture, we get the patient/individual to stand beside the plumb line with the string centred in the shoulder joint. With this line as a reference, we can see where the posture deviates. Proper anatomical posture is as follows, with the plumb line going through: 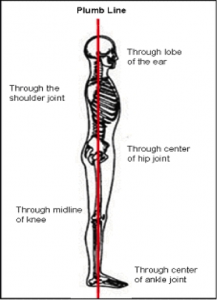 In our clinic, we encourage people to squeeze their hips and thigh muscles when in a standing position. This ensures that the knee and hip joints are in the proper anatomical position to prevent stress at those key joints, as well as activating those key muscles so that the load goes to the muscles instead of the joint. We encourage this not just when standing, but in any exercise or movement that has a standing component to it, such as the top of a squat or deadlift, or simply standing up from a seated position.

Many people encourage “soft knees” when standing to try to engage the thigh musculature with the theory that this will reduce stress at the joint. It is true that, by engaging the muscles around the joint, it will reduce the stress applied. However, when people have a “soft knee” it creates poor posture when standing, with the knees and hips not stacked when referencing the plumb line. This creates a moment arm at those joints, thus increasing any type of stress exponentially.

When we think about this moment arm concept when standing, if we have soft knees then our knee and hip joints are outside of the plumb line. As a result we are putting constant shear forces on these joints. This puts wear-and-tear on your joints over time, and eventually leads to injury. If we have the joints stacked, however, the moment arm is nonexistent, meaning that there is minimal, almost negligent shear force applied to the specific joints with the only forces being compression forces, which are safe and promote healthy joints.

Especially in a sport/athletic viewpoint, if we are adding weight by doing a squat or deadlift, the importance of stacking the joints in the finished position and activating those muscles is crucial. If the muscles are disengaged, or the joints are not stacked at the top of the movement with a moment arm from the applied load to the joint, there is an exponential increase in stress.  In theory this  can damage the joint and lead to injury.

Overall, we believe it is important to lock your knees by activating your core and hip muscles in order to prevent injury and protect the joint. Rather than having soft knees, which can put extra shear forces on the knees.

For more information check out our video below that shows you exactly what we mean by locking out the knees instead of soft knees.